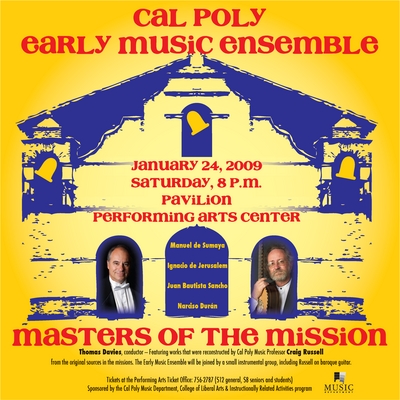 The concert, titled “Masters of the Mission,” will feature works that were reconstructed from the original sources in the missions by Cal Poly Music Professor and noted California mission music scholar Craig Russell. The Early Music Ensemble will be joined by a small instrumental group, including Russell on baroque guitar. Cal Poly Music Professor Thomas Davies will conduct the performance.

Some of the repertoire for the concert is drawn from the manuscripts of Juan Bautista Sancho, a friar at Mission San Antonio in the first decades of the 19th century, including a selection from his “Misa de Los Angeles” and “Credo” and “Sanctus” from “Misa en Sol.”

In addition, the ensemble will perform the mass “Misa del quarto tono para quatro voces” (“Mass in Mode four for four voices”). The music was found in the choirbooks of Narciso Durán, who served at Mission San José in the early 1800s.

Movements from masses by Ignacio de Jerusalem, the chapel master in Mexico City from 1750-1769, will also be performed, as well as a few selections in plainchant from the California choirbooks.

Works from the Corpus Christi processions will be included. Parades and ceremony were indispensable tools of the friars in their goal to convert the native Californians to the Christian faith, according to Russell, who calls some of the parade pieces “quite lovely and lilting.”

The group will also perform a selection of villancicos by Manuel de Sumaya. Villancicos are church pieces meant to imitate in style the music actually heard in popular culture in the plaza, ranch, field or city street.

The concert is sponsored by Cal Poly’s Music Department, College of Liberal Arts, and Instructionally Related Activities program. For more information, call the Music Department at 756-2406.