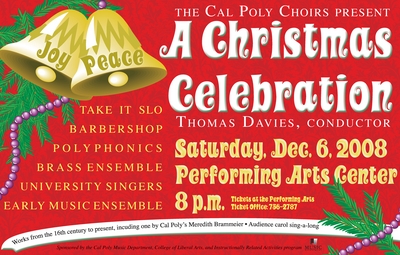 Concert flyer for the Cal Poly Choirs "A Christmas Celebration" concert. Red floral background with holiday decorations: bells with "joy" and "peace" on them.

Once again, PolyPhonics will be present a world premiere by Cal Poly composer Meredith Brammeier, titled “A Christmas Lullaby.” This marks the seventh consecutive year that Brammeier has written a work for the Cal Poly Choirs’ “A Christmas Celebration.”

The audience will have an opportunity to join in the holiday tradition of caroling.

Tickets are $10 students, $16 and $19 seniors, $17 and $20 general and are on sale at the Performing Arts Ticket Office from 10 a.m. to 5 p.m. weekdays and 10 a.m. to 2 p.m. Saturdays. To order by phone, call SLO-ARTS (756-2787). Patrons who buy season tickets to four Music Department events through the Performing Arts Ticket office will receive a 10 percent discount; a 15 percent discount is given to those who buy tickets to five or more events.