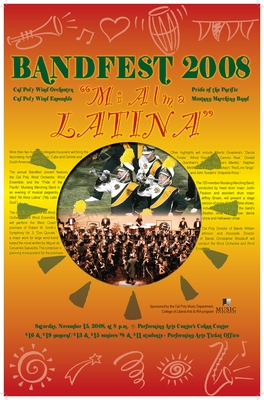 The combined forces of the Wind Orchestra and Wind Ensemble will perform the West Coast premiere of Robert W. Smith’s Symphony No. 3, “Don Quixote," a major work for large wind band based the novel written by Miguel de Cervantes Saavedra. The composer is planning to be present for the premiere.

The 120-member Mustang Marching Band, conducted by head drum major Justin Paulson and assistant drum major Jeffrey Brown, will present a stage version of some of its half-time shows, including excerpts from the band’s Beatles show, Latin show, dance show and Halloween show.

Bandfest is sponsored by Cal Poly’s Music Department, College of Liberal Arts, and Instructionally Related Activities program. Tickets are $8 to $19 and are on sale at the Performing Arts Ticket Office 10 a.m. to 5 p.m. weekdays and 10 a.m. to 2 p.m. Saturdays. To order by phone, call SLO-ARTS (756-2787). Discounts are given to patrons who buy tickets to four or more Music Department events for 2008-2009

For more information, call the Music Department at 756-2406.